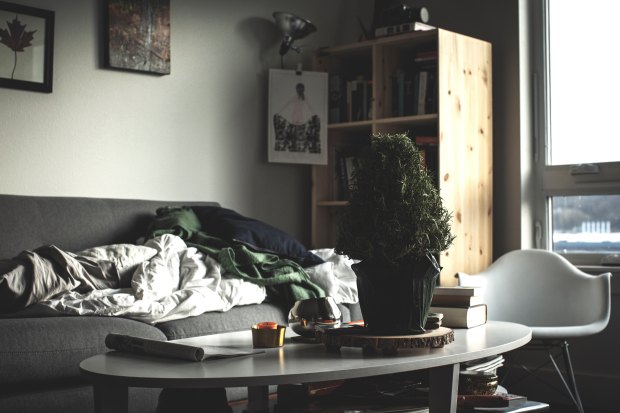 It sounds right. Αfter all, many of us have found ourselves stewing in hurt or bitterness because we expected one thing and got another. Sometimes we felt those expectations were justifiable (seriously, just throw the socks in the hamper already), sometimes we realize those expectations weren’t quite fair (how was he supposed to know I wanted a birthday breakfast in bed if I didn’t tell him?). Marriage involves compromises and communication, not stubbornness and reading each other’s minds.

But I don’t like the expectations-kill-happy-marriages advice. It doesn’t clarify what “expectations” mean. Worse, it implies that the only solution to unmet expectations is giving them up altogether. In fact, if you listen to popular Christian wife advice, the takeaway from expectations-kill-happy-marriages is this: You silly woman, your feelings and perspectives are what’s killing your marriage. Swallow your feelings, change your perspective, and your marriage will be hunky dory!

This might be the only survival method in a marriage where the husband’s perspective, feelings, and decisions take precedence, but this sort of thinking has no place in an egalitarian marriage. Our feelings are real, valid, and insightful. Our perspectives are significant and necessary. Our marriage’s happiness does not lie in forced female cheerfulness, but rather on mutual understanding, communication, and accommodation.

Often those expectations go unexamined and unexpressed because they’re such basic, fundamental things, things you think you both understand and agree on. Throwing tissues next to the wastebasket instead of in it? Seriously? That never came up during premarital counseling.

Once examined, that expectation can be expressed in a productive way: “It really bothers me that you leave your tissues lying around when there’s a wastebasket right now. I think that you should toss them immediately so that I don’t go crazy looking at them all weekend. Can you make it a priority to throw them away sooner rather than later?”

There’s nothing wrong with that expectation. It just needs to be understood as an expectation, as an issue that irritates you, and then communicated as such.

Another way unexamined and unexpressed expectations wreak havoc on marital bliss is when spouses don’t know what they want, especially when those expectations get buried under psuedo-arguments. Pseudo-arguments, in relationship psychology, are arguments that on the surface are about the tissues tossed next to the wastebasket, but at its core are about deeper issues relating to trust and commitment: “I don’t think you’re pulling your weight around the house. I don’t feel like you respect my feelings. I don’t think you’re taking my exhaustion seriously. I don’t feel heard or respected. I feel alone and unseen.”

That’s not to say that the tissues aren’t an irritation unto themselves, but the real heat and passion about the tissues comes from the disrespect and loneliness you feel after the tissue expectation goes misunderstood or unmet.

Again, the expectations aren’t at fault, but rather the lack of understanding and communication about them.

The first response to unmet expectations should not be to ignore your reactions or change your expectations. Strong feelings are not a sign of “being silly”; they are red flags signalling a deeper problem about being seen, loved, respected, and helped. Instead of dismissing unmet expectations outright, the disappointed party should examine the expectations thoroughly until she or he knows precisely what the expectation is, and then communicate that expectation clearly, respectfully, and collaboratively.

Here’s my unorthodox opinion: marital happiness rides and dies not only on one spouse clearly, respectfully, and collaboratively communicating expectations, but on the other spouse’s willingness to understand and accommodate these expectations.

Marriage itself is a set of non-negotiable expectations. Those expectations can be mutually changed or lowered, but at a certain point, they shift so much that they no longer resemble marriage.

At its core, marriage is (or ought to be) one giant expectation that you can trust your spouse to care about what you care about. It’s one giant expectation that you will both meet each other’s needs and honor each other’s wishes. Marital trust is built on those expectations; marital commitment follows through on those expectations. Happy, healthy marriages might look different in other specifics, but that is because the individuals within those marriages have different needs and wishes being met — emphasis on being met.

The fact that your happy Christian wife friend can overlook the tissues at her house is a sign that (1) she’s in denial or (2) tissues left by the wastebasket don’t bother her. It’s not a sign that scattered tissues shouldn’t bother you.

This does not mean that you should expect to get your own way, always, exactly as you envision it. That is a dysfunctional expectation, born out of a scarcity mindset, out of a lifetime of being told that either you matter or the one you love matters: you cannot both matter and maintain the relationship at the same time.

That’s why it’s essential to examine even the smallest, most petty expectation, to see where the non-negotiable expectations lie. Only when the expectations are drawn out as distinct, uncompromisable circles can they overlap into a Venn diagram of mutual compromise.

Maybe you can live with tissues lying out longer than you’d personally prefer, because the real issue is that you can’t live with picking up after a grown man. He wants a more lax, independent, let-me-deal-with-it-when-I-feel-like-it approach, and you don’t want to deal with it at all. Maybe the compromise is that he does whatever he wants with the tissues as long as they’re cleaned up by the end of the evening, or that the tissues must stay contained on his personal desk. Whatever the compromise, it cannot be reached by lowering the expectation that the wife’s feelings and desires matter.

And honestly, sadly, that’s what many marriages do require to continue: a relinquishing of the expectation that both spouses matter. Marriage becomes an either/or (either my spouse matters or I matter), instead of a both/and (I matter, and he matters, so what can we do to meet both of our needs and desires?).

This might be a functional relationship in the sense that it keeps conflict at bay or the couple out of divorce court. Unfortunately for those with a scarcity mindset, maybe this is the only kind of relationship where they feel loved or loving.

But it’s not a marriage.

So do expectations kill happy marriages?

But when examined, expressed, and accommodated without compromising the other spouse’s needs and desires, expectations don’t kill happy marriages. In fact, they are the very stuff that happy marriages are made of.