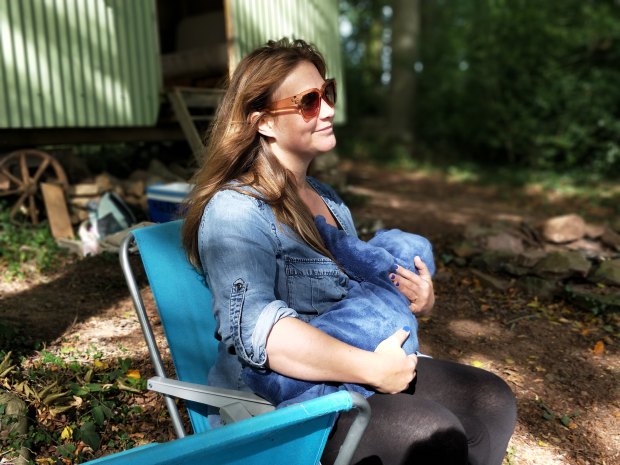 For all the convenience of whipping out a boob whenever your baby starts squawking, breastfeeding isn’t always a walk in the park. One of the hardest challenges was when e.e. started doing gymnastics at the breast, around nine months old. He was distracted, restless. He bit me a couple times. He started grabbing my glasses and my hair, and whacking my face and chest — hard. I wanted to wean him cold out of sheer self-preservation.

I didn’t really know how to handle it, because he was a baby, after all. How do you teach a baby? The only insight I knew about flailing baby hands was the punitive methods I’d heard in the past: pull his hair when he pulls yours; pinch him when he bites you; gently slap his hand if he smacks you. Show him how much it hurts.

My big breakthrough was giving up the idea that I could control my baby’s actions. That is, I couldn’t actually prevent him from trying to hit, pinch, bite, or pull my hair. It’s not like I could get inside his brain and flip an “off” switch for restless baby hands. Nor is that a developmentally appropriate expectation. Once I accepted that he would try to do those those things, I could focus on what I could control: preventing him from actually hitting, pinching, biting, or pulling my hair.

Babies don’t do anything out of malice. They do things to explore, to get a reaction. What happens if I pull on this long hair? What’s that fun sound Mommy’s skin makes when I slap it? Wow, Mommy yelled really loud when I did that! Why would she do that? Can I make her do it again?

A corollary insight: The more you make a big deal out of something, the more interesting to baby it becomes. For toddlers as mischievous, curious, and stubborn as mine (that is, most toddlers), Mommy’s big reactions are excellent opportunities to explore their power and influence — a healthy thing, a good thing, a normal thing, but a thing that gets old and hurtful real fast for Mommy.

It’s better to simply prevent the pain and redirect a baby toward a more pleasant way of being silly, stubborn, or curious.

When his little hand started whack-whack-whacking against me, I’d catch it in mine and kiss his palm. I’d turn it into a distraction far more fun than scratching Mommy’s cheek. I’d stroke my face with his hand, or stroke his face with his hand, or playfully shake his hand, or wiggle his fingers.  I’d play three little piggies on his toes, or the itsy bitsy spider on my fingers, or round and round the garden by his belly button. Usually he stopped trying to whack me fairly quickly, but sometimes he didn’t, and I’d just keep hold of his hand, blowing raspberries into his palm, until he was done eating.

In other words, I responded to what he really wanted: to move his hand, or be goofy with Mommy, or keep himself entertained while nursing. If I were to pinch him back or yank his hair or even cry, “NO! Bad touch!“, I’d be responding to a nonexistent impulse in babies: the impulse to be naughty or disobey or cause pain. The important thing is meeting him at his level, keeping myself safe, and reinforcing positive, pain-free things to do with his hands.

For biting, whether accidental from restlessness or purposeful from curiosity, I would yell out (an involuntary and unplanned response that I include only to keep it real). To reduce the restless acrobatics that led to bites, I learned to nurse him in distraction-free areas or pump a bottle to-go and avoid the issue altogether. If he was really restless, that was a sign to me that he either wasn’t hungry or wasn’t going to focus, anyways, and I set him down and tried again later. If he bit on purpose, I might set him down (not as a punishment, just to collect myself), or I might carry on with more intentional distraction. He didn’t bite more than a handful of times.

Last insight, a mantra really, a perspective that keeps me sane no matter what age of child I’m dealing with: this will not last forever. The standing-on-his-head, kicking, pinching, arm-flailing, tear-inducing, painful nursing stance he took as a nine-month-old only lasted a few months, at most. He naturally transitioned to a more mannerly nurser around age one.

My point is, there need not be any fear surrounding restless breastfeeding or slapping baby hands. He will not grow up to be a psychopath who delights in causing pain. It’s not a serious, ingrained character flaw that needs to be pinched out of him. It’s just a normal development in the breastfeeding relationship, and like all other aggravating parts of childhood, it will likely be short-lived, and it will certainly, eventually pass.

In the meantime, I grab hold of and kiss those flailing baby hands to keep my sanity and skin intact.