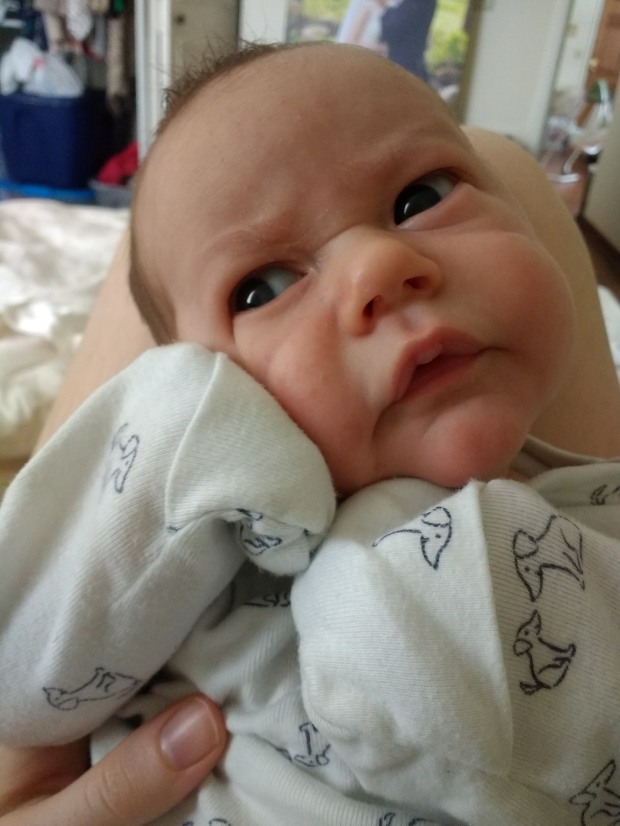 This is my little bambino, Emmerich Erich. We met at 4:39 Christmas morning, and it’s hard for me to remember life before him. It’s a life that involves little hands-free downtime where I’m not napping or trying to catch up on chores. My main accomplishment recently is watching too much How to Get Away with Murder during those week-long stretches when e.e. just wants snuggles and milk.

Not that he’s particularly clingy. e.e. is an exceptional child. Yes, yes, every mother thinks her child’s routine developmental markers are indications of his unprecedented talent, but it’s not just I saying it. Everyone at church, everyone at the pediatrician’s office, everyone sings e.e.’s praises: “I can’t believe he never fusses during church!” “He settled down so quickly after his shots!” “I’ve never seen such a good baby!”

Even though he started out as a 7 lbs., 1 oz. peanut, all those feedings added up to an impressive weight gain (mostly around his tummy, thunder thighs, and triple chin). From the beginning, he lifted his head up with almost perfect control and has accidentally rolled over three times already. He slept through night since day two, but has recently decided it’s more fun to snack through the night. Normally I don’t mind, and when I do mind, I stumble over to his bassinet to find him kicking and grinning, and all my grumpiness dissipates.

He’s so close to laughing out loud, but right now he just smiles with his whole face. He’s got a sweet dimple on his right cheek (and a couple on his fat knees) that just kills me from happiness every time he flashes a grin. We love talking with him. Agoo and random screeches are his first words. He’ll coo stories with a great range of dramatic emotions, usually about the ceiling fan or the blank walls.

He’s already reading, of course. When Daddy reads Jamberry, e.e. stares at the pictures. He has less patience for Mommy’s read alouds, so we do other things — splash in the bath, stroll around the neighborhood whenever it’s a degree above freezing, lie on the floor and kick, kick, kick. 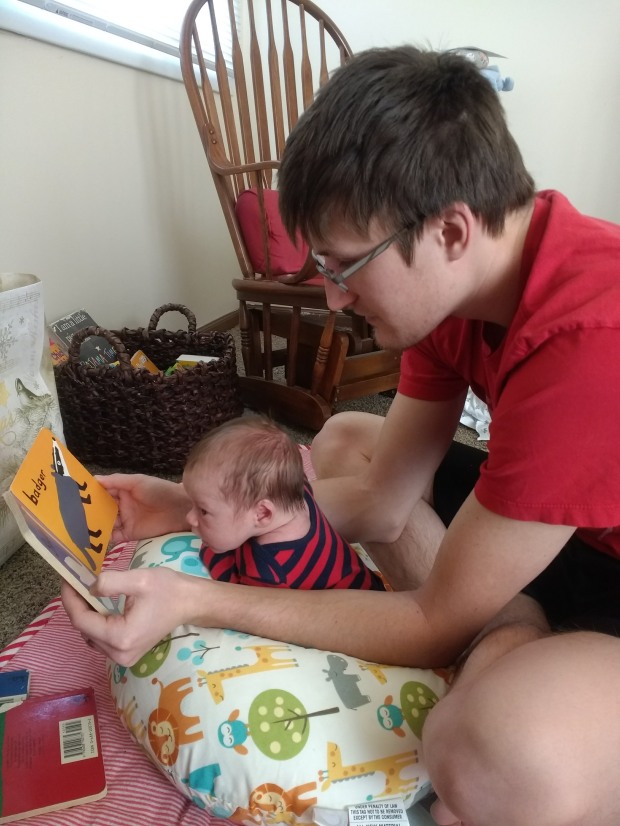 We joined a Baby & Me storytime at our local library for an excuse to get out of the house since it’s stubbornly still winter. e.e. is the youngest by several months. The other babies love pulling his hair and poking his eyes. He’s used to it, though, because his cousin Ella adores him. Whenever we visit, she cries, “Baby! Baby!” the entire time, then goes through her routine of emptying his diaper bag. Uncle Erich caught her smooching e.e. on the lips — an accident involving her attempt to give his cheek some sugar and e.e. interpreting it as food. They’ve already exchanged germs through e.e.’s pacifier, so, no big deal. 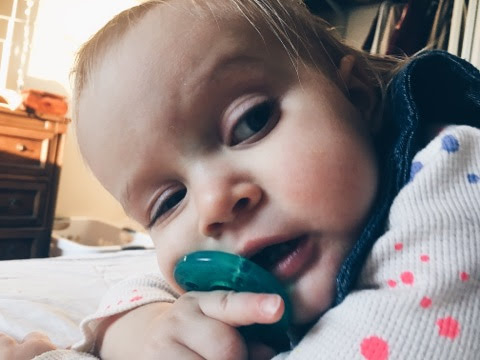 He’s two months old now. Two months. I already had that first ugly mom cry when I packed away his newborn clothes. I am just obsessed with him, especially now that his personality is bursting out of him. During the first month, I, sleep-deprived and confined to breastfeeding, bitterly observed to Erich that e.e. “didn’t love me, he just needed me.” But that has changed. He looks into my eyes, talks to me, searches me out, and responds to me differently than to others. He is completely a little person. 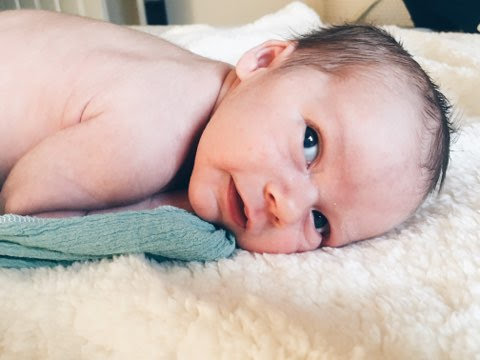 And that’s why I haven’t been writing. I’m too busy playing with him when he’s awake, and too busy staring at him while he sleeps, and I’m afraid that’s probably not going to change anytime soon.