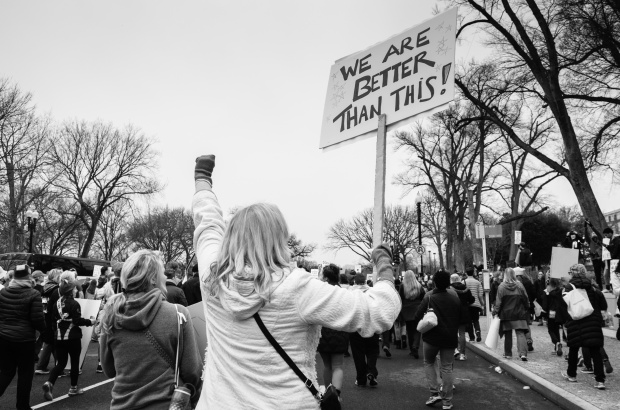 I thought about entitling this “Why I Didn’t March” to practice my clickbaiting skills.

I didn’t march because I forgot it was happening. And I didn’t say anything about it because when it did happen, it was by turns so embarrassing and empowering and confusing and controversial and awesome that I didn’t want to touch it with a ten-foot pole.

I have three thoughts:

(1) Some of the signs, attire, attitudes, and rhetoric made me think of an Onion article called “Gay-Pride Parade Sets Mainstream Acceptance of Gays Back 50 Years”:

“I’d always thought gays were regular people, just like you and me, and that the stereotype of homosexuals as hedonistic, sex-crazed deviants was just a destructive myth,” said mother of four Hannah Jarrett, 41, mortified at the sight of 17 tanned and oiled boys cavorting in jock straps to a throbbing techno beat on a float shaped like an enormous phallus. “Boy, oh, boy, was I wrong.”

I feel the same way with the feminist movement, sometimes. I try so hard to convince my friends, family, and acquaintances that feminists are just normal people with normal concerns about legitimate issues, and then women wear vaginas around their heads, march naked, and scream about nasty women.*

Of course those are the only incidents of the march that the anti-feminists will see.

Sometimes feminists complain about how anti-feminists view them as angry, loud, obnoxious women with no moral compass, and I just glare at vagina-head.

* I get that the nasty women and pussy power rhetoric was ironic. Anti-feminists don’t.

(2) That said, it’s freaking awesome to me that something called the “Women’s March” spawned the largest U.S. protest, with zero arrests reported; it occurred on every continent; and it brought together a ton of different people. That massive accomplishment is associated primarily with women, the “weaker sex,” the ones “Biblically unfit for leadership.”

(3) Speaking of which, one of the most grating things about all the Christian anti-feminist responses is the ignorance about female oppression and sexism within Christianity itself. Someone wrote a many-times-shared “list” of all the freedoms women in America have compared to women elsewhere, implying that it’s ridiculous for American women to claim any sort of systemic oppression from patriarchy. (We’ve all seen similar posts.)

But I have experienced sexism and discrimination, and I experienced it all within Christianity.

Whenever I see this argument, that I don’t see any real female oppression happening, I want to say this:

The worst part is that most won’t, because sexism within Christianity is so bad that it’s not even recognized as sexism. It’s Biblically sanctioned sexism.

Christians have told me and many other women, “You can’t do that because you’re a woman.”

That is straight-up sexism.

Our voices, our personalities, our gifts, our perspectives, and, in extreme but all-too-frequent cases, our lives have been repressed. That’s not even getting into the mess certain complementarian and patriarchal beliefs have made of people’s identities, marriages, and families.

Sure, women can pretty much “do as they please” in the secular world, give or take the challenges, but in mainstream Christianity, the majority still think that women are subordinate to men in some way, shape, or form. A vocal part of Christianity is even willing to risk Trinitarian heresy rather than revoke their views on women’s eternal subordination to man.

Even women support these things.

You know you’ve got a problem with patriarchy when it’s the women who argue most vehemently for the subordination of their fellow women.

But it’s still sexism, no matter how you hermeneutically slice it.

Last Saturday, I hope there were feminists marching to protest Christian sexism, because that patriarchal beast is still alive and well.