We met at a school dance our freshman year. He asked me to dance even though he thought I had a big nose and dressed like a frump. I still wasn’t used to guys paying any attention to me, much less leading me in the lindy hop. So I said yes, even though I thought he was crazy (but kind of cute) and exactly like my Inky Bob. After a “dance” of he making me laugh so hard that I flubbed up my footwork, he led me back to my roommate and asked for a high five. I declined. A fist bump? Heck no. How about a hug? For some reason, I gave him a hug — not a high five, not a fist bump, but the most awkward physical expression on this planet: a full-frontal hug to a tall stranger.

We forgot about each other until he saw me reading the Western Heritage reader underneath a tree. I had just come from chopping off thirteen inches of my hair. He introduced himself. I told him we’d already met.

I smashed a spider between the front cover and the title page. (The guts are still there, dried out, if you want to verify it.) This guy was nuts. But we did discover that we were taking the exact same Western Heritage class and that he had sat one person over from me for the first few class periods. He had moved to the back so he could fall asleep without bothering the professor. (It was an 8 AM class. Nobody was awake.)

But for the rest of the semester, three days a week, bright and early at 8 AM, he sat next to me in the front row. We poked each other to stay awake, and sometimes we scribbled stupid things to each other in our notebook margins. One day, he slipped me this note:

Can I have your phone number

— without a question mark, because he was a chemistry major and didn’t care.

That woke me up for the rest of the class. Short answer, no, he could not have my phone number. A phone number meant he wanted to date me, and I didn’t want to date him, and why the heck would any self-respecting young man ask a girl for her number in the middle of class?! But maybe he just wanted to be friends, and then I would look stupid for not giving him my number. Whatever, I’ll give him my number. I blushed, wrote down the number, and shoved the scrap of paper back at him. He put it in the breast pocket of his coat and forgot about it for weeks.

He mostly ignored me outside of class. He was lucky enough to find a group of three close friends right off the bat, and they weren’t exactly interested in letting me in on their adventures. I was good for entertainment, for showing me horrifying YouTube videos that I’d never seen in my sheltered life, and for laughing at my innocence as it died away with my screams. In any case, he only paid attention to me when his group of friends were busy with something else.

I got so mad at him for that, particularly because he sometimes flirted with me, but really because he had abs and most of the time didn’t flirt with me. I thought he was selfish, unsocialized, and hot. I ignored him too — until we got stuck driving back to Wisconsin together over winter break. My dad and I tried to make small talk with him, but he was shy and spent the entire time texting his crush. Weirdo.

Second semester freshman year started off terribly. His best friends (the crush and another guy) fell for each other, and my group of friends started falling apart. I cried a lot. For some reason, Erich was always there, a quiet, nonjudgmental person who let me talk without interrupting.

“Can I give you a hug?” he asked me during one outpouring of sorrow. I still hated physical contact, but I let him put his arms around me. “You know,” he said, “this would work better if you put your arms around me too.” I gave him a side hug from the front and kept crying.

For some reason, he found my unending emotions attractive — or, as he put it, fascinating — and developed a massive unspoken crush on me. When President’s Ball came around, he drew a huge heart in the snow that said, “Will you go to President’s Ball with me?” — for his friend group. That took care of having to ask me out. But since he didn’t want anybody else to take me either, he forced his roommate to escort me to the ball. 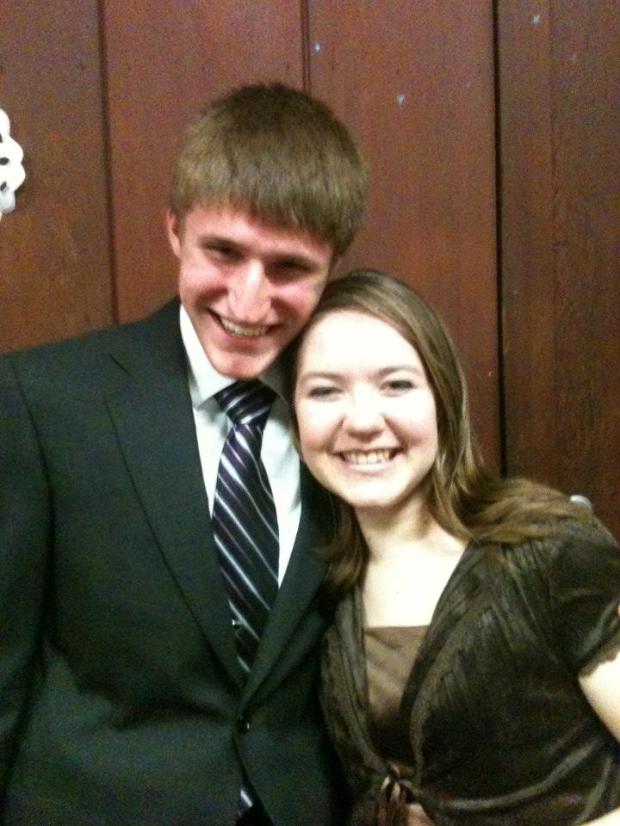 The roommate date abandoned me thirty minutes into the crowded dance, and a guy who I was avoiding found me, took me by the hand, and dragged me around looking for my date. (So much handholding from so many men in one night. It was gross.) And then I bumped into Erich — the biggest relief of my life. His hands weren’t clammy, and his fingers laced through mine as we weaved through the crowd.

I felt like a sinner for lacing fingers with a guy I wasn’t going to marry.

All semester, he walked me to and from class, opening my doors and tagging along wherever I was going. He was like a friendly shadow.

“You need to define the relationship.”

It was the easiest DTR ever. We took a walk around campus in the lamplight, and I told him that people thought we were dating, that don’t worry, I wasn’t interested, and that I thought of him as a little brother. (I had lectured myself not to use the brother line, because how cliché is that, but I panicked.) Then I cheerfully said, “I think it’s best to give each other some space. We shouldn’t talk to each other for a week. Good night!”

At the end of the week, a week without noticing his absence, I got this text:

I realized I hadn’t asked him how he felt about me.

None of this was going according to plan. “We can’t date,” I insisted. “You’re Catholic, and I’m Protestant. It wouldn’t work.” (What I meant to say was, “You’re probably not a Christian because you say, ‘Oh, my God’ and ‘sex’ in mixed company.” Those were the days when determining someone’s eternal salvation was easy.)

We met again the next night beneath the fluorescent glare of the chemistry overpass. I drew out our relationship on a napkin: “Here’s friendship. Here’s dating. We’ve already crossed the line into dating territory, so we need to take a step back.”

He stubbornly maintained his crush for me. I ended up bluntly saying I would never date him. He ended up confessing, “I will always respect your boundaries, but I will never stop trying to make you like me.” And then he sent me a recording of Jason Mraz’s “I Won’t Give Up on Us.”

The next day was horrible. He didn’t show up for class at 8 AM, and when I saw him at that couch in the student union, he was sick, pale, and crying. I cried a lot too, but there wasn’t any Erich to comfort me.

We spent the rest of the semester arguing about whether we should date or not. There were many things against it. When I asked him to explain the gospel, he sat in silence for five minutes before saying, “I don’t know.” He kept talking about Christ’s grace without reference to theological arguments. When I said, “Shh,” he whispered, “It” afterwards. He kept trying to hold my hand and snuggle close to me (and I actually liked it). He was infuriatingly not the guy I ever imagined myself dating.

But, there were many things for it. He took my theological lectures well, letting me read aloud The Reason for God and explain the Protestant emphases of the gospel over and over to him while we walked through the rain. He was a great listener. He put up with my emotions. He was a true friend to others. Again, he had abs.

And despite our differences and many other arguments too technical and redundant to speak of, he won me over. Now I get to hold his hand whenever I want.

10 thoughts on “Falling in Love”