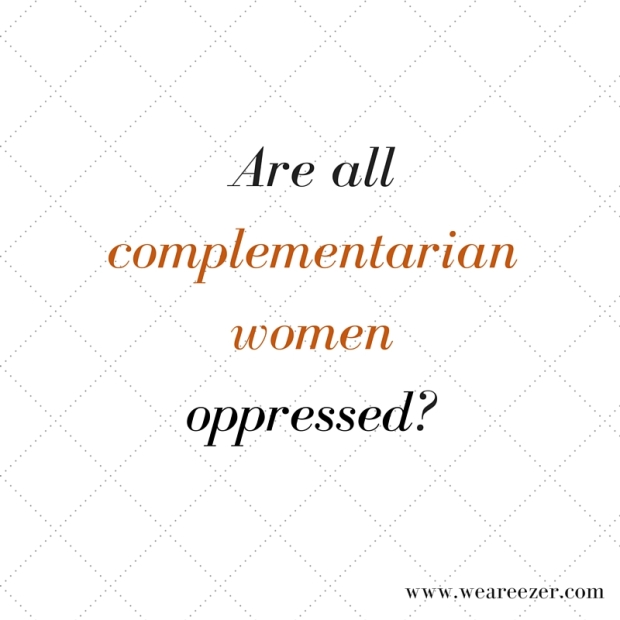 My friend asks a question every egalitarian woman should know how to answer:

How can you, as an egalitarian, affirm the personhood of a woman who embraces complementarianism? I’m just wondering whether you can, or if you see complementarians as being enslaved to the patriarchy (strong language, and exaggeration to convey my sentiment)? Because I would view myself as a complementarian and feel extremely comfortable with my femininity/my role/relationship with men. Would you affirm this as valid, or just view this as me just blind to my ignorance/conditioned to my oppression?

Yes, of course I would affirm the personhood of a complementarian woman! I affirm a woman’s right and ability to ascribe to certain views on gender and to believe, live, and promote those views without facing dismissal or strawman attacks. I would try to understand what she means by complementarianism in light of her other beliefs and her life story.

In fact, I’m fine with a woman personally holding to complementarian beliefs as long as she’s comfortable with them and does not try to limit other women. Part of that’s practicality; egalitarianism is not going to win over every woman, and I’m not going to let this argument hinder fruitful conversations and friendships formed around other issues.

For one thing, complementarianism as a word covers a broad spectrum of beliefs. On one end, it merely embraces the idea that men and women are different, and those differences ought to be celebrated and preserved. It encourages men and women to fulfill their natural roles within marriage and church. This sort of complementarianism is descriptive, rather than proscriptive: it’s trying to grasp observable differences between men and women and find the roles and lifestyle suitable to each sex and in line with Scripture. I think many of these complementarians are egalitarians at heart; they’ve just never been exposed to egalitarian interpretations of Scripture and/or egalitarian women.

The other end of the spectrum is far more proscriptive and hardnosed, often borrowing ideas from patriarchy. Instead of talking about who women are, this side of complementarianism talks about who women must and should be. It emphasizes male-dominated hierarchy and structure — unconditional leadership of men over women, unconditional submission of women under men — in all circumstances. It tends to promote a more one-size-fits-all womanhood: women must be this kind of wife, this kind of mother, and this kind of woman (i.e., a married, stay-at-home mom with no career but a home business). The first kind of complementarians are horrified that this second sort exists, and yes, I will say from personal experience that this sort of complementarianism is often spiritually abusive and oppressive.

It’s important to recognize the differences among the complementarian spectrum in general, and the individual nuances each complementarian gives of her own definition of complementarian. Complementarianism is a not a uniform belief system. (That’s one of my biggest problems with it; it tries to interpret Scripture in black and white ways but ends up applying it in any color but.)

Likewise, many egalitarians faced spiritual, emotional, and even physical and sexual abuse covered up or excused by complementarian teaching. That’s why many egalitarians are angry, wounded, and questioning — we experienced firsthand the need to question why our kind of womanhood wasn’t affirmed.

All of this to say, most of the complementarian women I know are free-thinkers who fully embrace the equality of men and women and would balk at female oppression. I wouldn’t dream of calling them oppressed. So yes, I gladly affirm any woman comfortable with her views of femininity, roles, and relationships, with one caveat — she must make room within her belief system for women with different giftings and personalities who have been oppressed by the patriarchy.

2 thoughts on “Are All Complementarian Women Oppressed?”